John Kopf began making fishing tackle and reels in Brooklyn, N.Y., about 1882. Over the next several years, he was granted six patents for tackle, four of them for reels.
The first reel patent described a means of covering a metal headcap with a disc of hard rubber. Half of the patent was assigned to Thomas B. Mills, of William Mills & Son, the New York tackle retailer. Mills catalogs featured single-action and multiplying reels made with the disc. 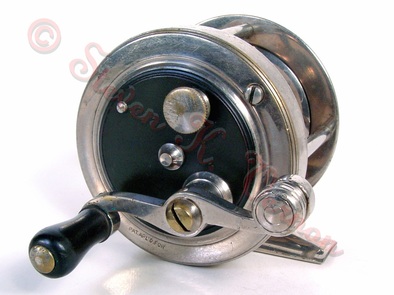 A Mills & Son plated-brass reel fitted with the rubber
headcap disc described in Kopf's first reel patent. It has a rotating click.
The second patent described a reel with a one-piece frame formed by folding a single piece of sheet brass into a U-shape to form two sideplates with an integral foot. Half of this patent also was assigned to Mills, and the invention became the basis of an extensive line of Mills "Eureka" reels, both single-action and multiplying.

Several Mills & Son "Eureka" reels, made with Kopf's one-piece folded frame.
The multiplier on the left has a rotating click.